So, why Alissa For TAFF?

Alissa has been around Fandom for ages. She's probably best-known at WorldCons and the like for running Children's Programming. There's a generation of con-going fandom who will grow up with Alissa and the great stuff they've done with kids as one of their first memories of fandom. Frankly, I can't wait until I can take my twins to experience Alissa + Company's impressive programming!

Alissa joined Chris Garcia, James Bacon, and Colin Harris to publish the 100 Page Monster issue of Journey Planet dedicated to Doctor Who in 2014. The issue itself is incredible.Go ahead, take a look for yourself!  Alissa, probably the biggest Doctor Who fan in the state of Arizona, and she makes everyone around her, already an enthusiastic bunch, even more enthusiastic through her passion. That translated into the issue, and so, in 2015, Alissa shared the Hugo Award for Best Fanzine! 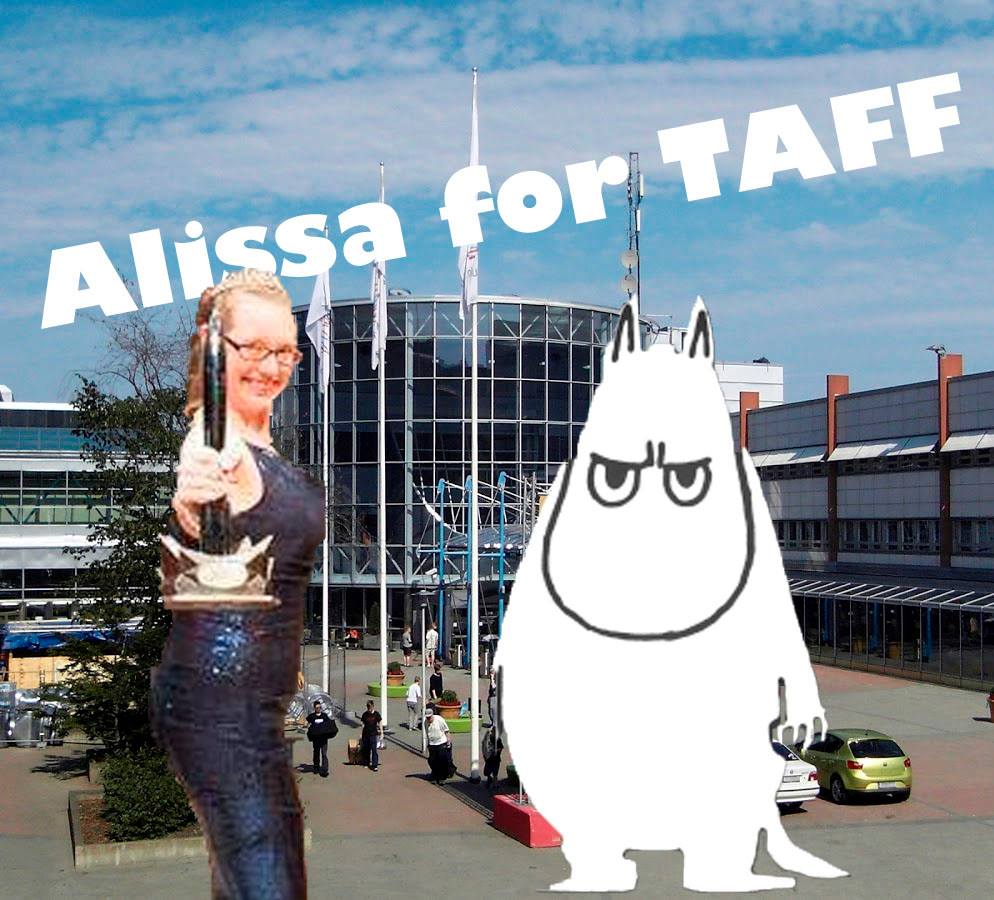 Alissa is one of those people who epitomises the best of fandom.  I don't think I know anyone
who is more unfailingly enthusiastic, committed, supportive and just a joy to spend time
with or work with.  But she's also not to be under-estimated, because all that creativity and hard
work always has an end product, whether it's editing a Hugo winning fanzine or ensuring that young fans
are entertained, inspired and educated.  At the end of the day, Alissa is not only a wonderful friend
but the perfect TAFF candidate, because TAFF is about people and community and connection;
and that's who she is, through and through. I hope you'll vote for her so that she can bring that
special energy to Helsinki in a few months' time!
Colin Harris - Former WorldCon Chair, 2015 Hugo Winner

I am so happy today!
I am so happy today!
I am so happy today!
No, this isn't an over-excitable puppy, this is the queen of unicorns and rainbows - and martial arts.
Let not Alissa McKersie's awesome children's program fool you, oh no. She is a mighty warrior.
Did you know she created frankenstuffies? Those poor plushies get ripped limb from limb and sewn back together for SCIENCE!
What barbarism!
You think she likes glitter because it sparkles? No! It gets in all the cracks and causes chaos for pretty SCIENCE!
Alissa is the queen of disguise, and with her skills of making everyone love her, of brightening the sky and bringing joy to the world she will infiltrate the heartlands of Europe and spread her special kind of scientific magic everywhere.
​Alissa is truly wonderful and her personality, warmth and love is contagious.

Emma England - Con-Runner, All Around Genius!


"I've know Alissa for 6 years and she has always been one of the most positive, enthusiastic and friendly fans. She embraced children's programming and made it her own, and made an amazing impression on so many young fans and their parents. She has done great work for a number of fanzines. But most of all, her enthusiasm leaves a lasting impact on everyone she meets, and I have no doubt she will carry this into get TAFF trip, and will be a wonderful ambassador for fan funds."
James Shields - Con-Runner, Member: The League of Irish Jameses


From Elizabeth McCarty's Nomination Letter!
"I’m writing to you to nominate Alissa McKersie for TAFF so that she can (hopefully) attend Worldcon 75 in Helsinki next year. Alissa is a Hugo Award winning (Fanzine, Journey Planet, Spokane 2015) fan who has spent most of her Worldcon time tirelessly running and assisting with Children’s Programming. She is a super enthusiastic, positive contributor to our culture and fandom. I’ve not attended a regional (IL) or Worldcon that she was at where she wasn’t working in some capacity. I was able to observe Alissa a lot more at MidAmeriCon II this year as my child was finally old enough for Kid’s Programming. Alissa is very organized and competent and she cares very deeply about her charges and staff. Thanks to her efforts at Worldcons, countless of parents have been able to enjoy their panels and other items knowing their kids were entertained, educated and looked after. That is a piece of mind that you cannot put a price on! She is a serious Doctor Who addict who is almost always wearing something in honor of that series (best Tardis dress ever). She a fan in the best sense of that word. People like Alissa are hard to come by. She works so very hard, doing jobs that many people wouldn’t care to do, all with a smile. She would be a wonderful representative for TAFF and would bring a great energy to Helsinki next year. She truly deserves this opportunity.
Thank you
​Elizabeth McCarty (Division Head for Lonestarcon 3 and MidAmeriCon II)"​

Every time I meet Alissa, I wish I had known her for longer than I have (which is not long enough), because quite simply Alissa is awesome. But why would she be good as a TAFF delegate?

The first reason is because she cares. If that means she’s putting lids on glue or filling up her entire flat with headless teddy bears for kids programme, or turning up to support someone else, it’s because she cares about fans, including younger fans, and making their time at a convention the best it can be.

The second is because she listens. I’ve seen her listen in a crowded room to one person, and I’ve seen her stop another group of people who were unhappy with another person simply by saying ‘I want to hear what you have to say’. She genuinely wants to listen and learn from different voices. She wants all of us to be good fans, and she leads by example without even realising it.

Third is because she does random things just to make other people happy. She she once sent me a letter from the London Bridge in the US because it was funny. The post had torn the corner of the postcard off so I couldn’t see who it was from, but no one else but Alissa would have done it. Busted!

So that’s three good reasons, and if you don’t know her, TAFF is the best chance you have to do so. Get awesome! Vote Alissa.
Esther MacCallum-Stewart - Empress of All Things! 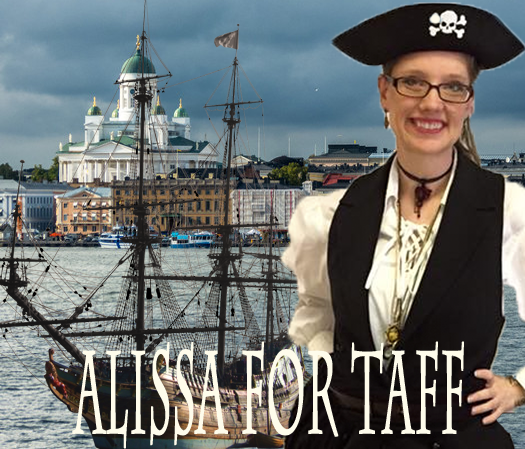